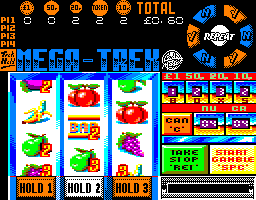 Robert Small has reviewed Jaws by Screen 7. Unusually, there are two versions of this game, both by the same developer (Intelligent Design), and the second version only seems to have been released on a compilation from Ubi Soft called Top 25. Robert’s review is for the original release.


Juan José Martínez has tweeted that he will release his latest game, Hyperdrive, this Friday 9th December. Hyperdrive is a vertically scrolling space shoot-’em-up that, in a departure from Juan’s previous releases, will only be available as a GX4000 cartridge file or a Dandanator ROM file, rather than a cassette or disc image. There is more information about Hyperdrive on Juan’s web site.


Copper France has released two videos of a new game he is developing called Sente Mini Golf. It’s an unofficial conversion of Bally Sente’s coin-op arcade game of the same name from 1985, and as the name suggests, you play a round of miniature golf, with a wide variety of unusual designs. Your ability to progress depends on how well you play on each hole.

You can watch videos of the normal CPC version and the Plus version on YouTube. There are more screenshots on CPC-POWER, although there’s no indication yet of when it will be released.

I have reviewed the top six games from the recent #CPCRetroDev 2022 contest:

The organisers of the 2022 #CPCRetroDev contest have announced that there were mistakes in the scoring of games, which has adversely affected the results of the top five games.

One of the rules of the competition was that entries would receive points if they included some sort of gesture to the game Lárcenas Legacy, which was the winner of the first #CPCRetroDev contest back in 2013. Two of the top five entries, Dire Dare and Deep, Deeper, Deepest, contained a gesture, but they didn’t receive the 25 points that they were entitled to. If the points had been awarded, Dire Dare would have finished in second place, and Deep, Deeper, Deepest would have finished in fourth place.


It’s good to see that CNGSoft and Carlos Pérezgrin eventually received the recognition they deserve, and hopefully there won’t be any such mistakes in future contests.


Cyrille Gouret (alias Ayor61) released Missile Command yesterday. As you might expect, it’s a version of the classic coin-op arcade game from Atari. Cyrille has developed it for the GX4000 and Plus machines as a tribute to Atari, Inc., which was founded 50 years ago, in 1972. The action is fast and frantic as you try your best to defend six cities against an onslaught of ballistic missiles raining down from the sky. You can download Missile Command from itch.io.

CPC Game Reviews has been revamped


You may have noticed that CPC Game Reviews has also been revamped slightly. I’ve spent several months on and off rewriting the code for the site and finally bringing it into the 21st century! There is now a search bar at the top of each page to enable you to search for reviews of your favourite games, and you can now view news articles all the way back to the beginning of 2014. If your browser window is wide enough, you should also see a screenshot and a link to a random review from the site on the left of the home page.

However, some features have been removed in the meantime. All of the scans of advertisements have gone, as the prevalence of ad-blocking software on browsers meant that users couldn’t see them! The database of Amtix! ratings has also gone, although in the long term, I hope to bring this back and display them against each individual review. I’ve also removed the page of links to other Amstrad CPC sites, as it was getting too out of date, although again, I may bring it back in the future. At the moment, I want to focus on the site’s main theme – reviews.

Please feel free to e-mail me at nich <AT> durge <DOT> org and let me know what you think.


Back in 2019, Batman Group uploaded a teaser of their racing game Vespertino to YouTube. It was so impressive that some people (including me) struggled to believe – or indeed, denied – that they were witnessing an Amstrad CPC game, and the footage was fake.

Well, Batman Group has released some more footage of Vespertino being developed and the code being assembled in WinAPE, in response to recent claims that the project is a hoax. The video shows the car selection menu with the 3D rendered rotating cars, and a car driving slowly along the race track. It’s enough to convince me that, yes, Vespertino is real and the original footage wasn’t faked. There’s still no indication of when it will be released, but Batman Group has tweeted that they have a surprise for the CPC community before the end of the year and to “stay tuned”.

The new raw footage can be viewed at files.fm, and Xyphoe has also uploaded a video with his thoughts on the new footage, which you can watch below.


The results of the #CPCRetroDev 2022 contest were announced in an awards ceremony that was streamed last Friday, which you can watch on YouTube. There seemed to be more of a competition this year, with Penguin Attack, Castaway, Dire Dare and Druid & Droid all battling it out and exchanging positions throughout the ceremony. For a long time it looked like Penguin Attack was going to be the winner, but right at the end, Castaway sneaked ahead to claim first prize!

Here are the results and prizes:

All of the entries can be downloaded from itch.io.


Robert Small has reviewed The Adventures of Bond… Basildon Bond.

I have reviewed three games, all of which were released in the last few weeks:


I’ll try to review some of the #CPCRetroDev 2022 entries soon.


The submission deadline for the 2022 #CPCRetroDev contest passed last night, and a total of 42 entries have been submitted. This is the tenth edition of the contest. You can view and download the entries on the itch.io page for the contest. As always, there are a few standout entries from the ‘professional’ developers (i.e. individuals or teams who aren’t students at the University of Alicante, who organise the competition).

Members of the public can take part in voting, although you will need both an itch.io account and a Google account to do this. The winner of the public vote will receive a prize of €200 courtesy of AUA.


ESP Soft has released the third and final instalment of their Columns CPC trilogy. First there was Columns in 2004 (which was also ESP Soft’s first ever release). The second game, Totems, followed in 2012, and now comes CPC Jewels. Most of you should know how to play Columns – columns of three tiles fall from the top of the screen, and you have to match tiles so that three or more of the same tile form a vertical, horizontal or diagonal line.

CPC Jewels can be purchased and downloaded from itch.io – yes, you will have to pay to download the game, but it only costs $1.00 (excluding VAT), and in my opinion, it’s well worth a dollar, even at current exchange rates. If you’re interested in a physical copy on cassette, you can purchase a copy from Matranet for €8.75 – although shipping costs an additional €10.70 for most European countries outside Spain.


Amid all the excitement around the release of Toki, the Mojon Twins released Ramiro el Vampiro III yesterday, just in time for Halloween. Ramiro’s daughter has invited some friends around for a party, but they are hungry, so Ramiro has to forage for mushrooms in the forest.

As with most of the Mojon Twins’ other games, this is a platform game, but there is a clever gameplay mechanic. As you play a vampire, you can only remain in sunlight for a short period – so while you collect the mushrooms, you have to find one as quickly as you can and then find somewhere dark to shelter and restore your energy before you can venture out again.

You can download Ramiro el Vampiro III from itch.io.